Saw the Virginia Creepers before we left “town” – they were resupplying out of a car parked at the Relax Inn. Thanked them for my surprise and felt inadequate; I don’t think I properly conveyed how amazing their gift was.

OWL got a ride to the post office with one of their group, and I started hiking about 11, knowing OWL would catch up to me in no time. A really pretty walk today through fields and cow pastures and forest. Got to Crawfish Trail Campsite and saw Smiles there. He was trying to decide whether to stay the night, or push on to the shelter. A decision we all have to make every single day. There was a cool little rhododendron “house” for a small rock cairn on the firepit. Clevergirl & crew were there last night, looks like something Otto would make. It was really impressive – put together like a log house with joints and cuts in the wood.

I left Smiles there, and started the climb up to the shelter. Lots of fence stiles in this area; I have finally gotten the hang of climbing up, turning around on top of the stile, and climbing down. One area had lots of cows hanging out by the river, but they were nice cows and let me pass without any problems.

Strained my knee a bit going up steps after the Holston River Bridge, so it was extremely slow going from there on out. Went about a mile to a campsite – tried to text OWL to let her know I was spending the night there but didn’t have any service, so I trudged on…slowly. My knee panged with every step, and I was going under 1mph. Finally got to the shelter about 7:30pm – the latest I’ve ever gotten to the shelter but still an hour before dark. More than enought time to get water, set up the tent, cook dinner (my favorite: loaded baked potatoes), and then go to bed. All The Way, GrandBob, Hammer, OWL, Loco Pony & Hummingbird are here, along with two section hikers. I am worried about my knee – it is a little swollen – it doesn’t feel collapsed or weak so we’ll see how it feels tomorrow. 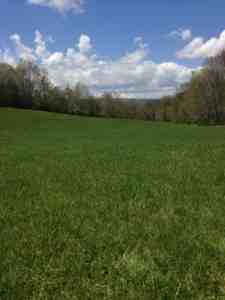 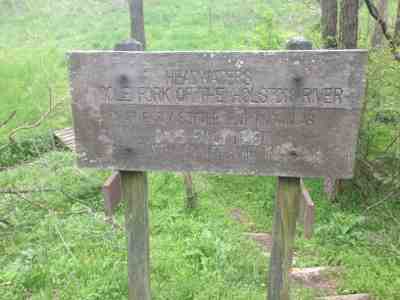 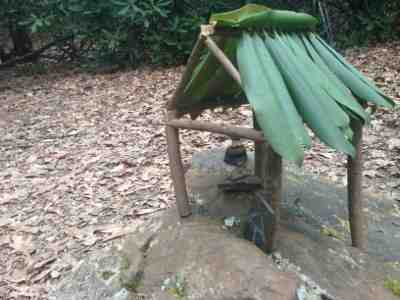 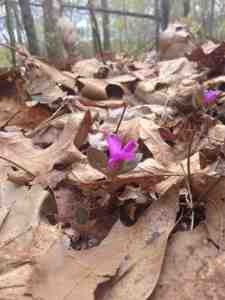 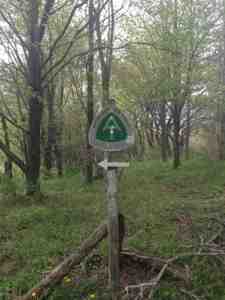 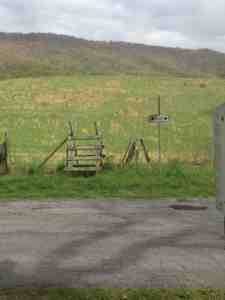 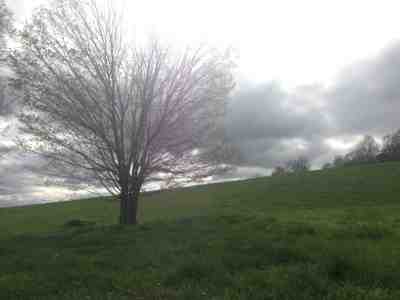 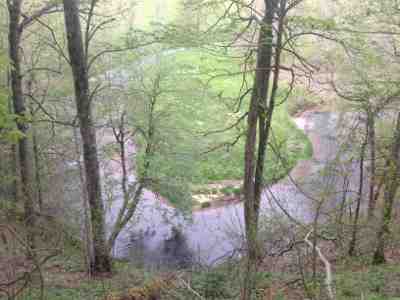 Took our sweet time getting ready to leave town – we were hoping to meet Old Goat’s wife when she arrived to pick him up but she hadn’t arrived by hotel checkout time…so off we went.

We saw three deer in the woods right outside of Erwin – pretty neat to see wildlife. The trail crossed a railroad track, and then went uphill out of Erwin. We stopped at the first shelter outside Erwin to have a snack – saw Whole Bean & UV & their dog Mazey – then kept going. We made excellent time but a storm started blowing in. By the time we got to Beauty Spot (a bald overlooking Erwin), the storm was here. We set up camp at a campsite near the road – there was a nice water source, and other people were there also so it felt pretty safe. Once again I was able to get my tent set up before the storm hit – I’ve been really lucky so far. Cooked dinner in my vestibule (the small space created when the rain fly of the tent is staked out) – and went to bed.

A really great day – hiked on and off with OWL all day. 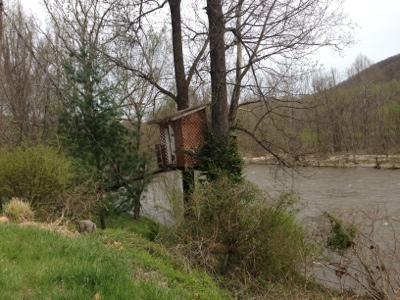 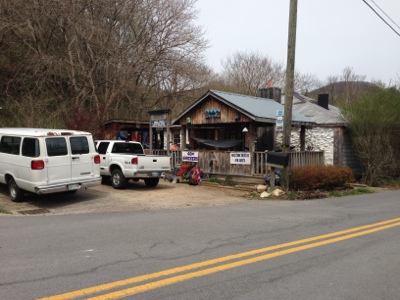 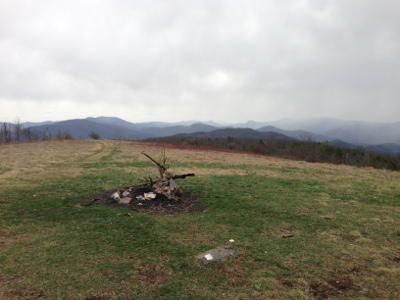 16.8 miles (whoa)
Longest day yet and boy do I feel it! Got up pretty early and started hiking. A beautiful (but rocky) climb up to Firescald Knob – the views contained 360 degrees of beauty. I got completely lost on the summit to Big Butt Mountain. The trail came down a rock jumble and you could either continue going down, or go back up to the ridgeline over rocks. I started going up the rocks, but it was pretty strenuous and I didn’t see any white blazes. (On rock jumbles there will often be blazes on the rocks to show you the way). Turned around and I saw a blaze on a tree – so thought I must have just missed it before and the trail was headed downhill. Well….the blaze I saw was meant for Southbound hikers to mark the trail. I went about 30 yards down the mountain before thinking, “this is more bushwacking than I expected”. So turned around, climbed back up the summit to where I *knew* the trail was, and tried again. Still no luck. As I was getting ready to head back up the rockpile, two more hikers came by. So I just followed them. 🙂 Sure enough, about 20 feet up the rock jumble you could see a white blaze.

I was pretty freaked out. Despite my name (zag – because I sometimes go the wrong way) – I haven’t been lost in a very long time. (Like, since the 2nd day before I knew that double blazes meant…a change is coming! Pay attention!). So I listened to Leonard Cohen to calm my nerves.

Walked down a long fire road and made ok time. Stopped for a snack at Jerry’s Cabin Shelter (in the vicinity of the shelter, not actually IN the shelter like some hikers).

The trail was very scenic and it felt great to take my time and just enjoy the day. There were some sections through pastures, others through balds, others right next to stream cascades. I knew there was a thunderstorm supposed to hit tonight, but I figured I had plenty of time to get to the campsite before it hit.

Then by the time I started up the mountain, the storm clouds were moving in fast. I could feel the change in the air – more humid, a little colder – and knew I had to get a move on to the campsite. Since the campsite didn’t have water, I loaded up with 3L more water…call me zag the camel for the second day in a row.

I was so afraid that the storm was going to start while I was on the ridgeline, but there was nothing to do but walk as fast as I can. I texted OWL to see where she was – she couldn’t find the flats (there is no “welcome to Big Flats” sign on the trail), so she was hiking on to find where others were camped. Finally I found them, 0.2 miles from Rice Gap. Put up the tent in a hurry – the rain started about 15 minutes after I got set up.

Had tofu curry for dinner. The curry was delicious but the tofu did not rehydrate well. Another lesson learned. 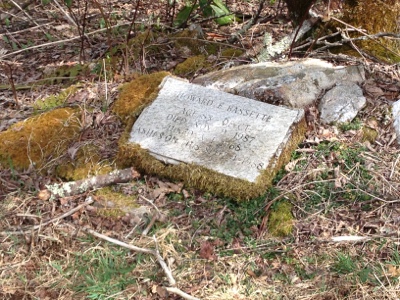 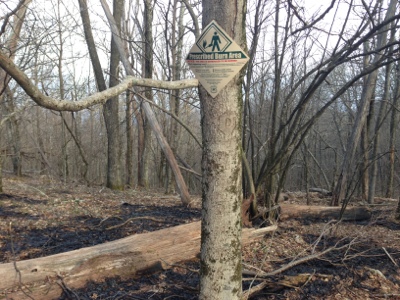 Another long day, as has become the norm. Left camp by 8:30am. Hiked uphill (how am I still so miserably slow on uphills?). It was so hot – and my shorts are in Erwin – so I stripped down to my compression shorts and was very comfortable. Sorry, fellow hikers.

Got to the Little Laurel Shelter and saw a note about the hiker virus: “puke and feces everywhere in and near the shelter”. Yeah…not going anywhere near that place. The forest service had issued an alert that norovirus was affecting hikers between Hot Springs and Erwin, and that hikers should avoid the shelters, privys, and (generally) all contact. There were all sorts of hiker rumors about people getting sick left and right. So we got water (and treated it, as usual), and ate lunch nearby with Goat, BearCub, and Sriacha (who is on his second bottle).

OWL called with a surprise – the forest service had closed the trail a few miles before the Jerry’s Cabin shelter (our destination for the night), and was shuttling people around to Big Butt Mountain. I didn’t ask why – assumed it was because of the hiker virus. So after a leisurely lunch we had to hike hard to get to the shuttle point.

We got to the Jones Meadow campsite and I was surprised to see so many people there. They said that the trail was closed due to a controlled burn, and that the FS was allowing people to camp right where they closed the trail but there wasn’t any water. They also said that the FS *was* running shuttles around, but that you had to hike 5 miles up Big Butt Mountain to return to the AT.

That didn’t sound like much fun, but I wanted to catch up to OWL. So I loaded my 3L nalgene water carrier, and my 2L camelback, and my 1L nalgene…yes, 6L of water at 2.4lbs per L…and started the 1.5 mile hike. Got to a trail intersection and saw a walkie talkie on the ground. So I stopped and waited for a few minutes – sure enough a ranger came by and said the trail was closed. They actually brought up a bunch of water for the folks who were camped there…ah well, I would rather be prepared (with extra water for my friends) than dependent on the kindness of rangers.

Set up camp next to OWL, Old Goat, M80 (who received his name when he threw a firecracker at a bear…the bear dropped his food bag and ran away), his wife Trooper, and their dog Willow. Took forever to eat my dinner…I wasn’t very hungry but food is fuel. Had a celebratory nip of scotch for our 300 mile mark. Watched the sunset and went to sleep. 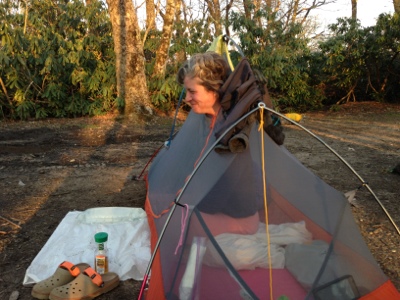 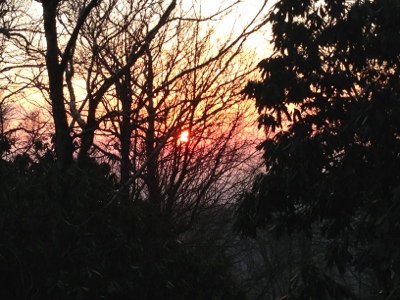 When you have to make a choice and don't make it, that is in itself a choice.
William James, psychologist (1842-1910)