Last Friday L. and I loaded up the packs, kissed our wives goodbye, and went on a 4-day shakedown hike. (A “shakedown hike” is just what it sounds like – we wanted to try out our new gear in real world hiking conditions). What better place to hike than the portion of the AT that we had already hiked. We parked at Amicalola Falls State Park, registered at the visitor center, and caught a shuttle to Woody Gap.

The adventure started there. The guy L. had called for the shuttle was scheduled for chemo treatment on our arrival day, so he sent his 75-year-old wife, Dixie. The first thing she said to us after “hello” was “do either of you get carsick?”. Upon hearing “no” she started talking – and didn’t stop until we had parked an hour later at Woody Gap. She had lots of stories about people she had shuttled. There were 40 year old “kids” who had planned a section hike with their dad, only to find out they couldn’t hack it. A man in a business suit carrying a suitcase. A man dressed as Jesus who carried a hollow cross (he kept all his food & supplies inside the cross). A man who called from Savannah, GA wanting a ride. That same man made it to Atlanta with his 85-pound pack, with a machete and “enough rope to tie up the Queen Mary”. When cautioned that he should save his cell phone battery for emergencies, he noted that he was just going to plug it up when he got to the shelter. (He spent one night in the woods and then called for a return shuttle the next day). She told stories of her best friend, whose 4th husband set aside $50,000 for a funeral. After he died, she spent $10,000 on a very nice funeral and then got herself a “face lift and a boob job”.

When we got to Woody Gap, Dixie was still talking. She pointed at the left side of the road. “You want to go that way, but the bathroom is on the other side of the road”. Thanks, Dixie. Your confidence in us is incredible. We set off (in the right direction) a few minutes later.
It is easy to see why people caution not to go too fast the first day. I was really excited to be out hiking – on the AT – and didn’t have any trouble keeping up with L.’s long legs. We made it to the Gooch Gap shelter pretty quickly – it’s only 4 miles or so – and set up camp. The Gooch Gap shelter is a double-decker shelter with a composting privy and a good water source nearby. We were the only people there, and took over the top level of the shelter as well as most of the picnic table. The shelter has a capacity of 12…I’m not sure how that is supposed to work, exactly. But – we had it pretty good. Slept in the shelter – no mice – and had a good night’s sleep. 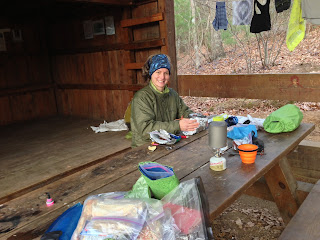 I do have a little tiny problem called – I like to sleep in my warm and comfy sleeping bag until it is past time to get up. (I have this problem at home, too). It’s something I’m going to have to work on.

I knew this second day would be the hardest day – we were planning to get to Hawk Mountain Shelter – which crosses over Justus Mountain & Sassafras Mountain. I remembered Sassafras Mountain from our first trip – we were counting our steps, stopping to breathe at step 50, and continuing on in fog so think we could barely see 3 feet forward. I knew it was going to be a bitch. And I was ready.

Turns out – I really was ready. We stopped at the top of Justus and had a snack. Stopped at the top of Sassafras  and was pretty impressed with myself – it wasn’t as tough as I remembered. Dropped into Hightower Gap and saw some kids with brand new equipment at the road. Also saw a guy headed north, carrying a huge pack. Headed to Gatlinburg. He was out of water (and there wasn’t any until he got over Sassafras and Justus, so I gave him some of mine). Talked a bit about the fire on the approach trail – he said the shelter on the approach trail had been burned, and a SOBO thru hiker had gotten a fine for ignoring the trail closure. By the time I stopped talking with him, L. was long gone. And that’s when I ran smack into MotherFucker Mountain (not the official name). I was so excited to be done with Sassafras that I didn’t save any momentum for what came after.

I was really zapped by the time I got to the shelter. And I was pretty bummed that there were other people there – the shelter had already been claimed and there were a group of 3-4 boy scouts with adult supervision in tents. I went to get water and discovered that the SteriPen pre-filter doesn’t work so well when the water is at a trickle…luckily L. let me borrow her water scooper. We set up our tents and tried to eat supper. I was not at all hungry for butter & herb rice with edamame and carrots…ate a few spoonfuls and saved the rest for breakfast. Talked to Emily briefly and fell asleep.

Authority without wisdom is like a heavy axe without an edge: fitter to bruise than polish.
Anne Bradstreet, poet (1612-1672)